DIY guide: How to reset the PCM unit of the Kia Magentis II MG 2.0L MT 2006Y.
A remarkable unit SIM2K-140 , which, for example, uses the PCMFlash to read the complete dump of flash memory AM29BDD160GD , from the address 0xh to the address 1FFFFFxh , and only calibrations are written.
Actually, the story of the sad (relatively) case of replacing the calibrations in the above immo: 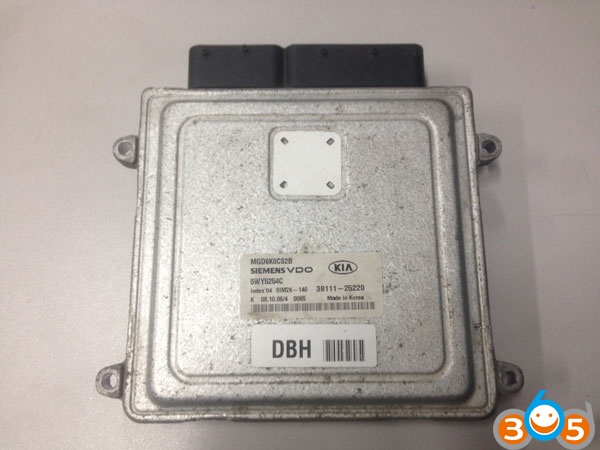 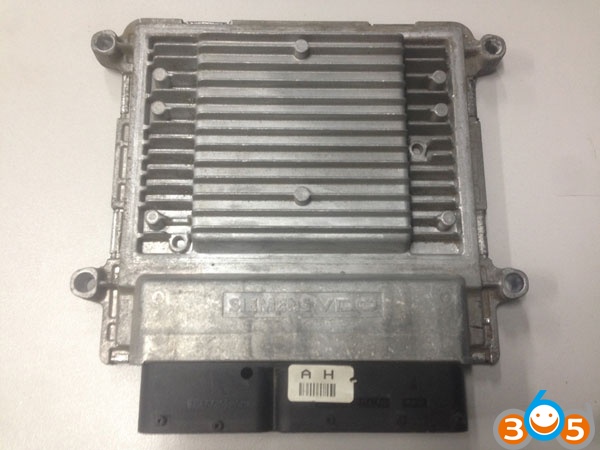 As they told me:
The car was replaced by ICE and sort of like the calibration did not correspond to reality, accordingly bad traction, unnecessary errors, etc. Colleagues decided to fill in alternative calibrations, and they did it, but in the future the engine of the car did not start, because activated immobilizer, which in this car is missing from the factory (there is no Immo unit, antenna on the ignition lock, a chip in the key, wiring …)
This computer consists of 4 parts:
1. Bootloader – 0x0000 – 0x1FFFF (131,072 bytes)
2. Calibration – 0x40000-0x5FFFF (131,072 bytes)
3. Firmware:
___ 1st part – 0x20000-0x3FFFF (131,072 bytes)
___ 2- I part – 0x80000-0x17FFFF (1,048,576 bytes)
4. Ego Industry – 0x180000-0x19FFFF (131,072 bytes)
Accordingly, after filling the wrong calibration, the content of Eeprom was changed (according to the new calibrations the processor decided that it was Immo and registered it), which the flashers did not rewrite via the diagnostic connector .
Therefore, for the resurrection of the unit without the Immo it is necessary to dismantle it from the car, take apart, connect to the BDM programmer, read flash memory, change it, program, assemble, install on the car, start the engine and wish a happy journey.
Unlock the unit: 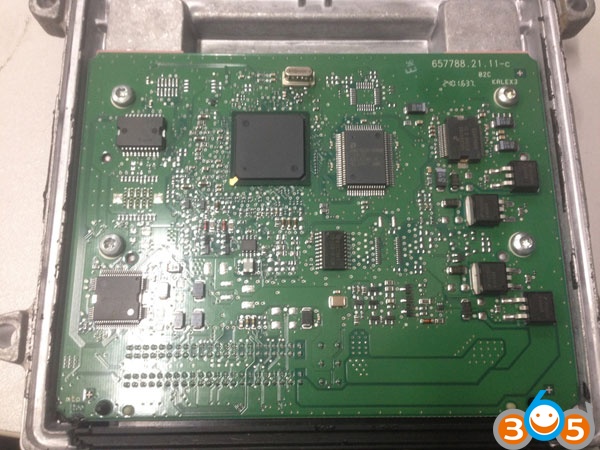 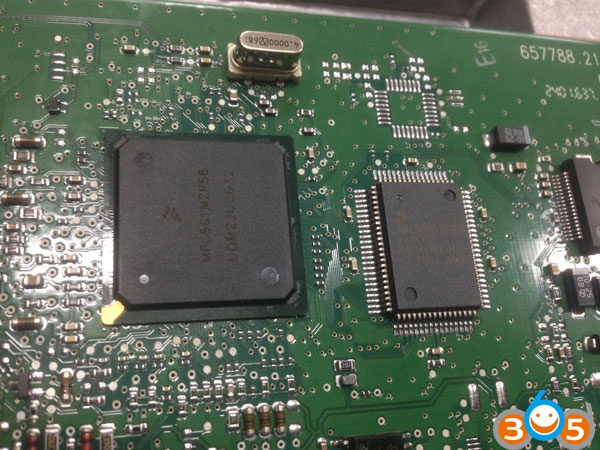 Next on the board is the desired flash memory: 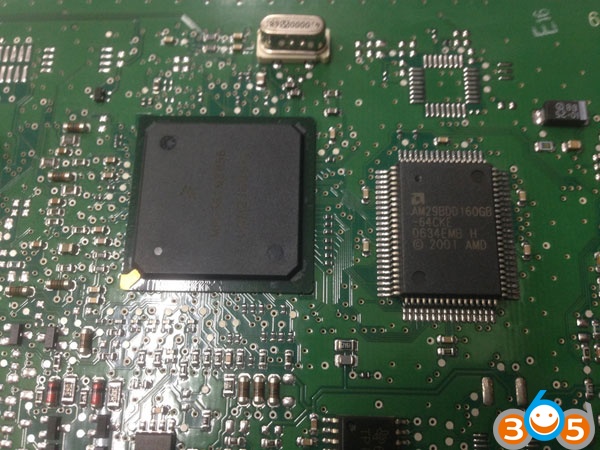 Well, a little higher and to the left of the BDM- pad: 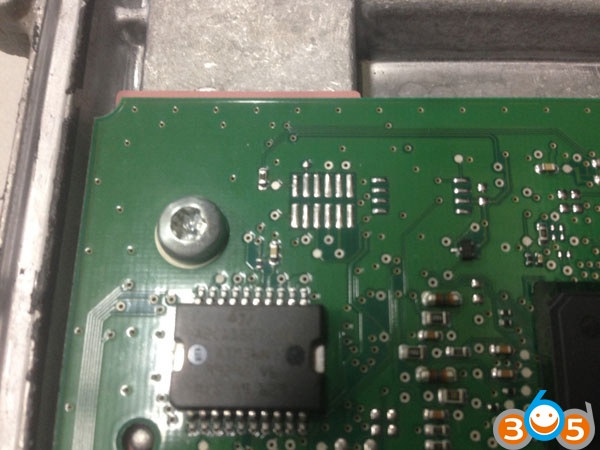 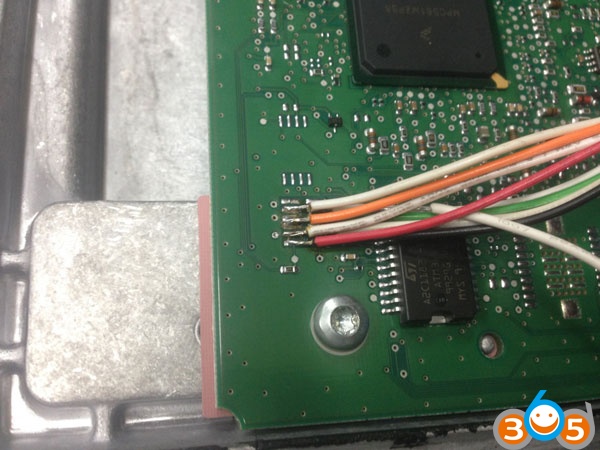 We will use BDM100 ecu programmer (MPC BDM Programmer): 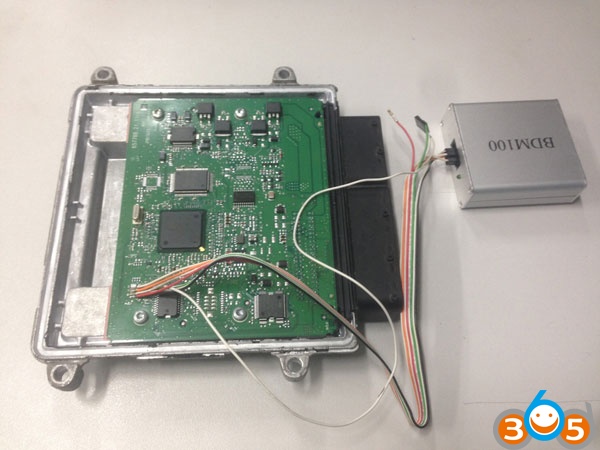 We supply power to the unit from the laboratory PC, and also power the program, run the software and press the ON button: 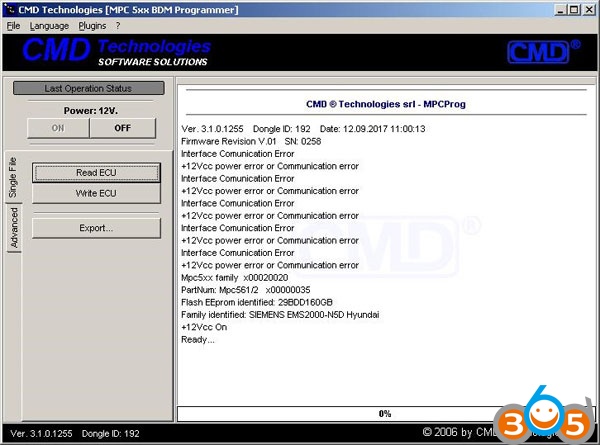 Now we will read. If you use the Single file tab, the firmware is considered to be in the format of the program, which does not suit us, but we still believe. Click Read Ecu . It was considered approximately for a minute: 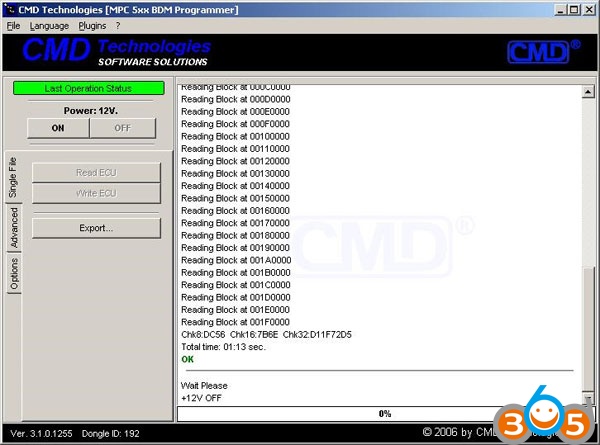 Now go to the Advanced tab . Just here is what we need, specifically flash: 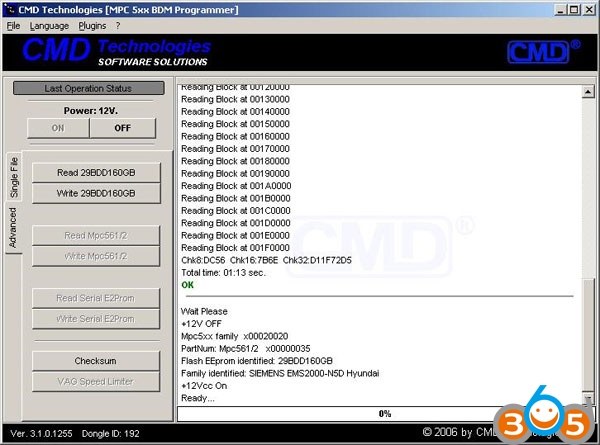 Press Read, o5 is still counted for a minute: 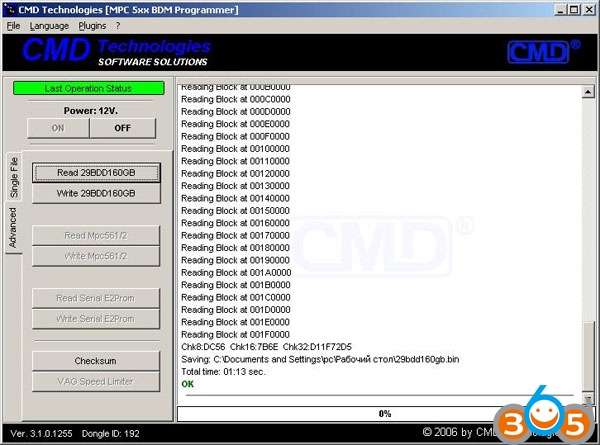 The single file does not interest us, its size is 425kb. A purely read 2048 kb flash is what you need. Now let’s compare the file that the colleagues initially counted from this ecu, and the one that I now subtracted, for example via WinHex . It turns out 81533 differences. Now open HexCmp2 and already clearly see the differences: 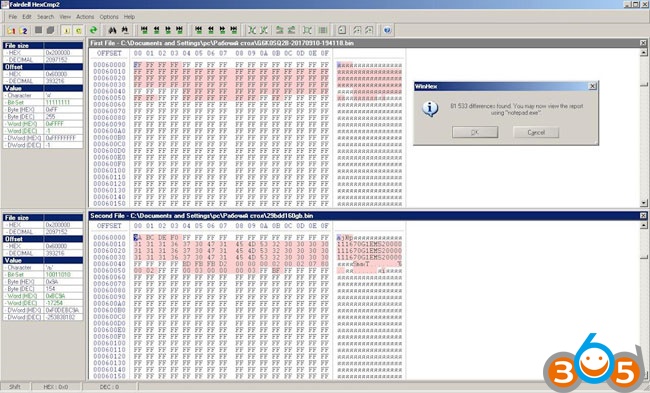 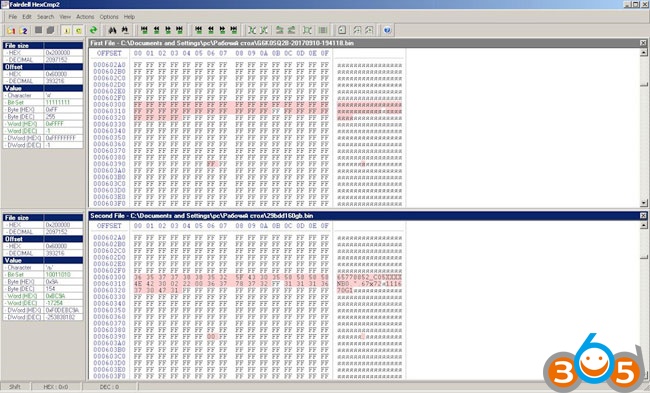 All clear. Now we will record the original file, originally read by colleagues. To do this, on the Advanced tab, click the corresponding record button and select the correct file. Then, the BDM-100 program will ask about our intentions, agree: 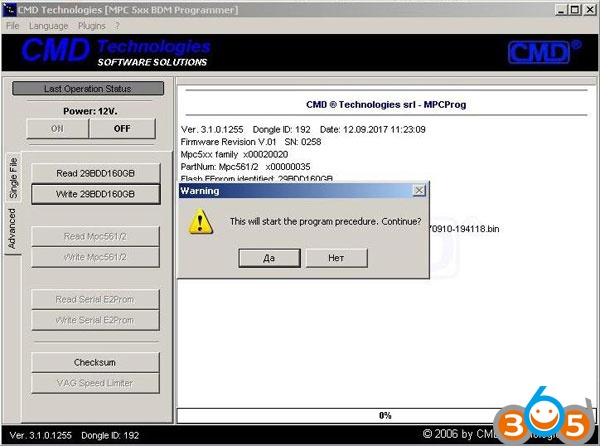 In the process of writing: 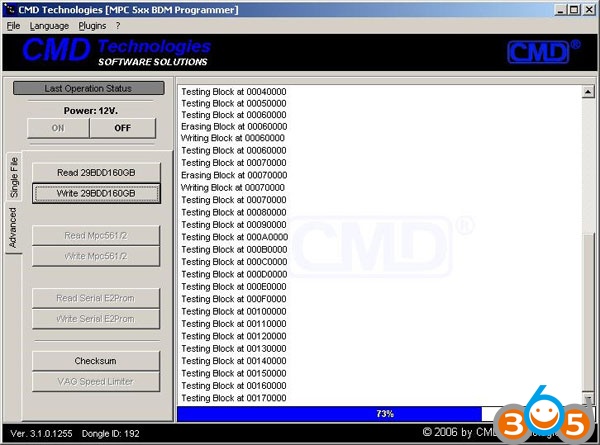 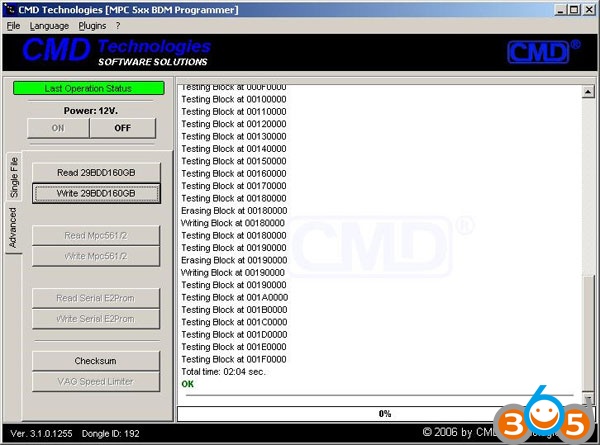 Most of the way is passed, now we turn off, we unsolder the wires, we go to the place of the car ridden by colleagues: 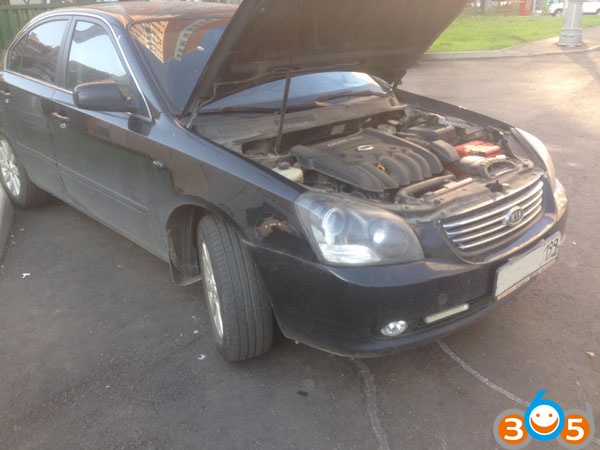 Connect a single connector, tk. MT. In the case of AT, there would be two connectors: 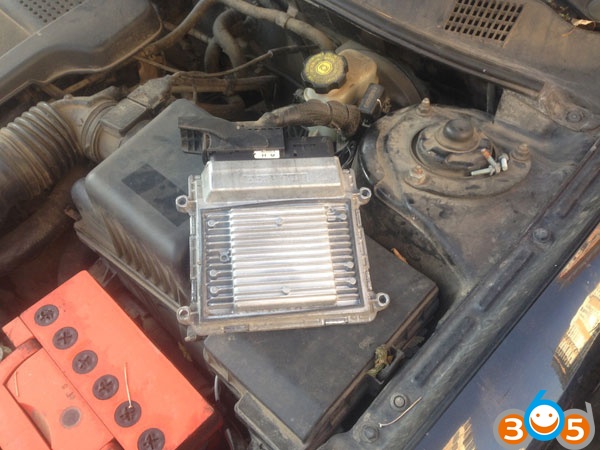 Let’s see what’s happened. The key to the start and ICE here also started, which I even did not doubt: 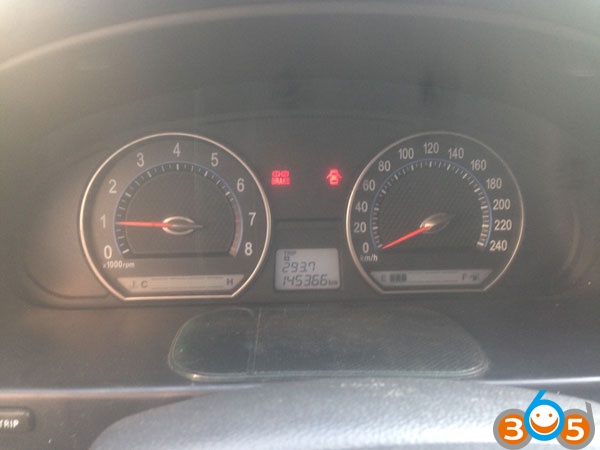 Colleagues and the car owner of course, are happy.  Because the costs of reset PCM unit are minimized.
Disclaimer:
We would like to express my gratitude to P1on3R91 from Russia for the tutorial provided. You are at your risk.
http://blog.obdii365.com/2018/01/24/reset-kia-magentis-ii-pcm-with-bdm100/