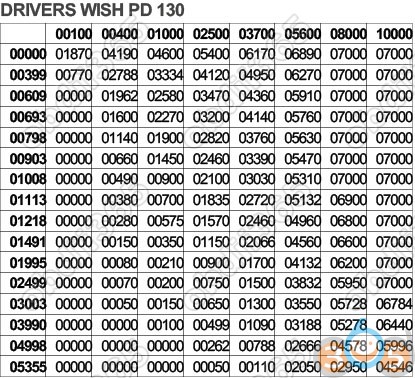 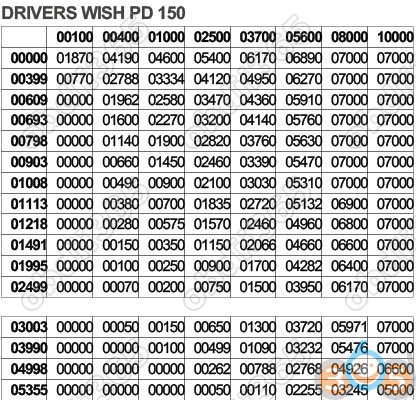 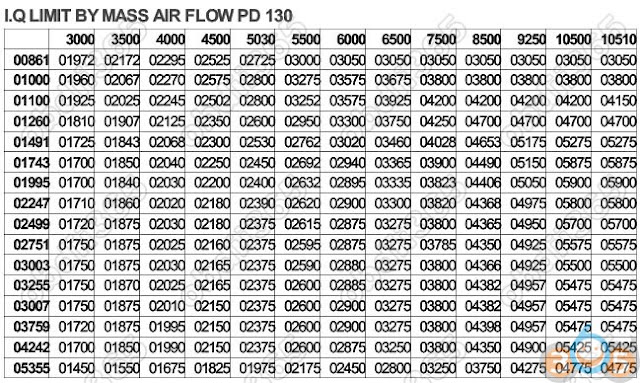 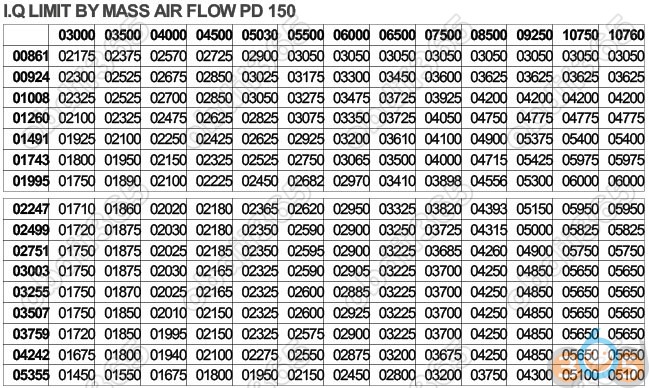 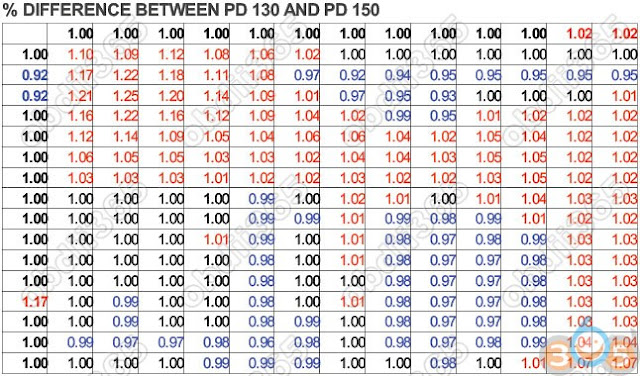 The Percentage difference chart shows that the axes are unchanged between 130 and 150 ECU’s
The torque limiter is Atmospheric Air Pressure dependent (First column , Y – axis). It is based on three Air pressures, 850, 900 and 1000
mbars.
Normal sea level air pressure is roughly 1000 mbars so the ecu ‘s limiting will normally be based on the last row. The other rows are designed
to reduce I.Q and indirectly turbo speed at lower air pressure.
This is to stop the turbo over-reving in thin air and destroying itself. For this reason the figures in the first row are always lower than the figures
in the last row.
At all pressures the I.Q output for the 150 is increased over the 130 from about 1900 RPM. This is the point at which the turbocharger starts to
blow.
There is no point in having a higher I.Q below this 1900 RPM as their will not be enough air available.
The 130 has a peak I.Q of 56 mg/stroke. This only increase to a maximum of 57.50 mg/stroke for the 150.
So the 150 injects 3 to 10% more fuel per stroke than the 130.
The Torque map limiting the maximum I.Q to 57.50 mg/stroke.
Even if the Drivers wish requests an I.Q of 70 mg/stroke, it will be limited by the Mass Air Flow to 60 mg/stroke maximum and
this will then be limited by the Torque limiter to a maximum of 57.50 mg/stroke.
So to remap a PD 130 to 150 you can see that;
You don’t need to change the Drivers wish. It already requests up to 70 mg/stroke fuel, which is plenty.
You can change the MAF limiting (smoke) map to give more I.Q at high Mass Air Flow rates and a little bit at low MAF & low rpm to make the
engine pull more strongly at low rpm.
Beware increasing I.Q too much at low Mass Air Flow. If you do, you will get alot of black smoke.
You can change the Torque limiting map to allow more I.Q from about 1900 rpm. The peak I.Q must reduce slightly as RPM rise and the final
column must be 0000.
You should make sure that I.Q is first limited by Drivers wish (Highest I.Q). Next I.Q should be limited by MAF (Lower than drivers wish). Finally
I.Q should be limited by the Torque limiter. (Lowest I.Q)
Changing Injection Quantity is not a simple thing. The engine ecu contains calibration maps which turn requested I.Q into actual fuel injection.
The I.Q is made up of two main factors.
DURATION of injection and Start of Injection (SOI). So a requested I.Q must be calibrated as a set duration of injection with a set starting
point.
Duration maps (0 – 5) for SEAT pd 130 and 150 are identical, which means that they can cope with the change of I.Q needed to go from 130
converted by Web2PDFConvert.com
Duration maps (0 – 5) for SEAT pd 130 and 150 are identical, which means that they can cope with the change of I.Q needed to go from 130
bhp to 150 bhp.
BUT
Start of Injection maps (TEN maps) are different for the pd 130 and pd 150 engines. The example below is for SOI 0. It shows very little
change and is similar to the other 9 SOI maps. To save space I am only showing SOI 0 on this page. All 10 can be seen in the excel
spreadsheet download at the bottom of the page.
START OF INJECTION 0 (SOI 0)
First row (X) is I.Q (0 – 5500) Multiply by 0.01 to see it as I.Q in mg/stroke. (5500 x 0.01 = 55 mg/stroke)
First column is engine rpm (0 – 5000)
Chart data (Z) is Crankshaft rotation. Multiply by 0.02347 to see it as degrees of crankshaft rotation. (2901 x 0.023437 = 67.99 degrees)
If you want to see this expressed as degrees Before Top Dead Centre (BTDC) You must take the degree answer from 78. (78 – 67.99 =
10.01 degrees BTDC). 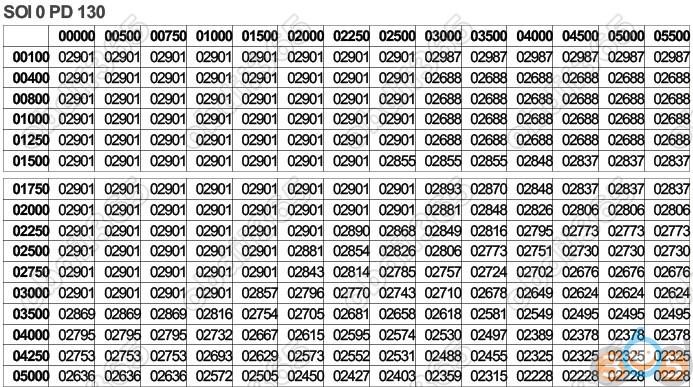 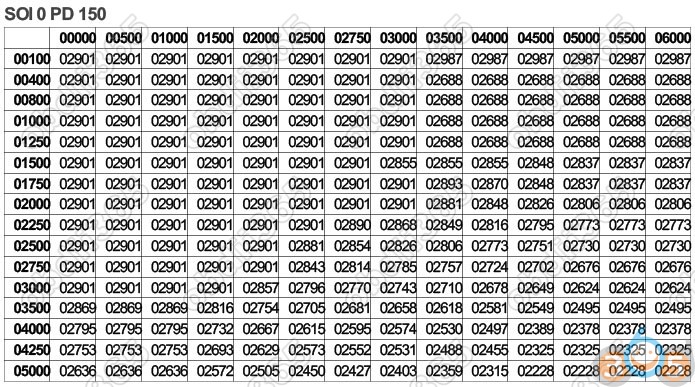 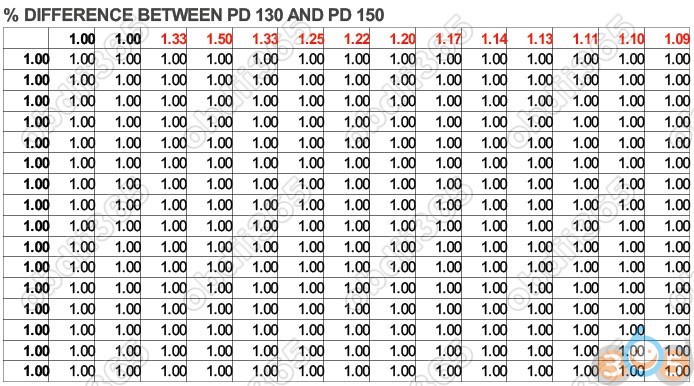 Duration and SOI maps are very hard to interpret.
The % difference chart for SOI 0, pd 130 vs pd 150 shows almost no difference. All ten SOI maps show the same change.
All ten have the X – axis changed to allow more fuel to be injected. The I.Q allowed on the axis has increased from 50 mg/stroke to 55
mg/stroke.
This has been achieved by removing the 7.5 mg/stroke column, moving all the other columns one column to the left and adding an extra 55
mg/stroke column at the end.
The timing of injection is advanced slightly by moving the columns one place to the left. So more fuel can be injected by starting injection
slightly earlier.
This brings two benifits.
More power from more fuel and more power due to advance in timing of start of injection.
At this point, the fuelling is sorted and as you can see, it has not been altered by much.
The next area for improvement is the air supply. (Turbocharger)
The Turbocharger consists of three maps.
A desired turbocharger pressure map
A turbocharger control valve map.
A turbocharger pressure limiting map
A turbocharger Single Value Pressure Limiter.
TURBOCHARGER BOOST PRESSURE MAP.
First row (X) is Injection Quantity (I.Q) (0 – 5000). Multiply by 0.01 to see it as mg/stroke. (5000 x 0.01 = 50 mg/stroke)
First column (Y) is engine RPM. (0 – 4746)
Chart data (Z) is required boost pressure. (0 – 2350 mbars) 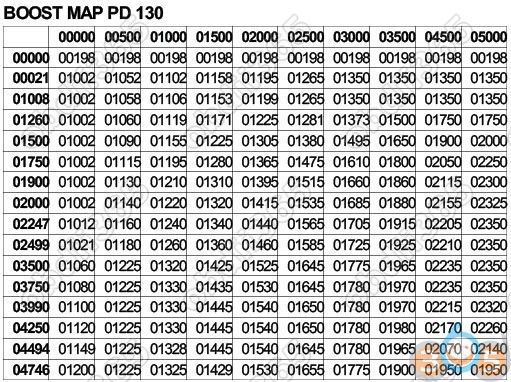 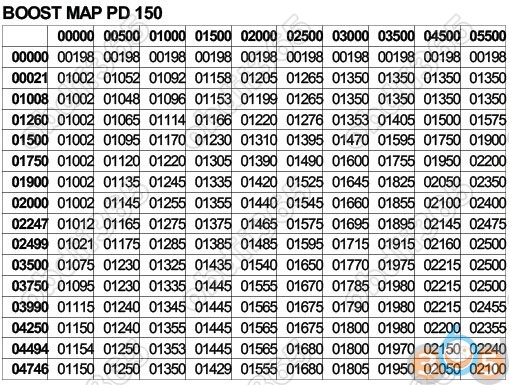 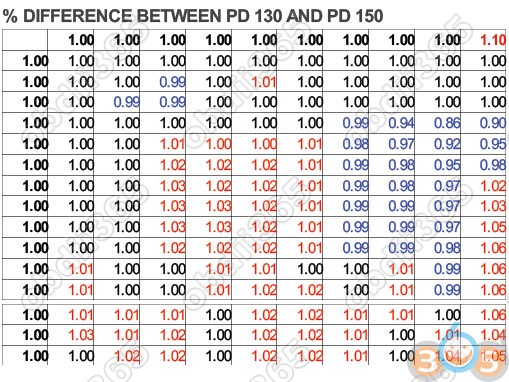 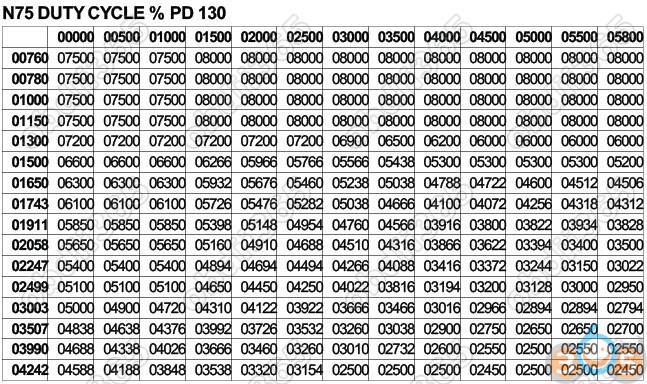 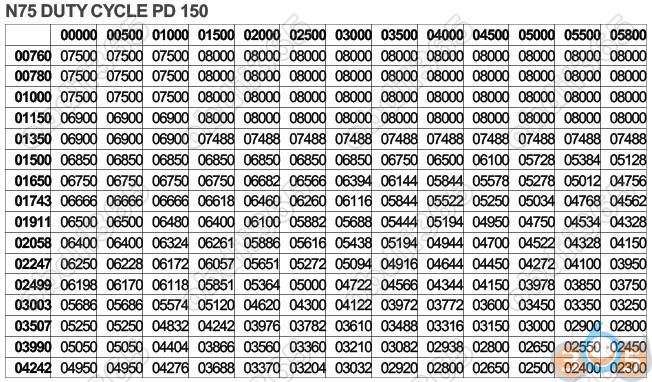 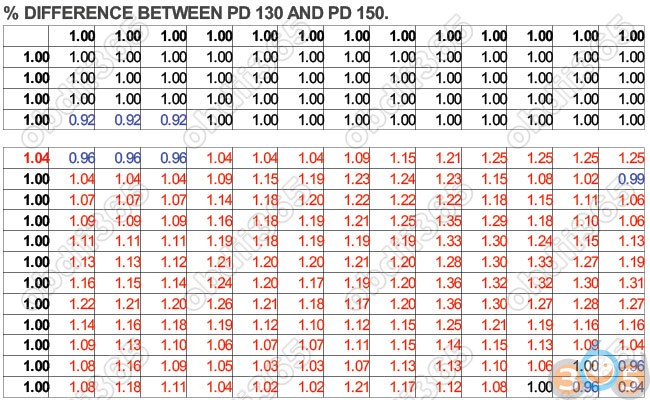 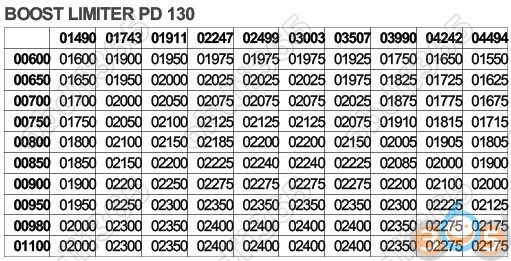 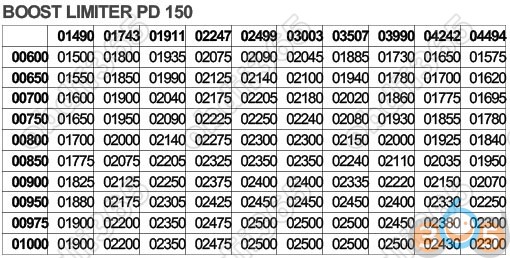 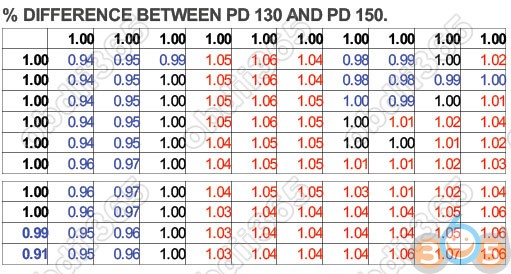 The % difference chart shows that the 150 allows slightly higher (up to 6%) boost at middle to high rpm, so the 150 is slightly less turbo
limiting.
So the 20 BHP increase from 130 to 150 bhp is mainly achieved by increasing the Injected Quantity slightly and increasing the turbocharger
boost slightly.
Obviously the designers feel that this extra 20 bhp is not too much strain for the engine.
It is possible to increase bhp beyond 150 bhp. Many engine tuners claim to remap 1.9 pd tdi diesels from 130 to almost 180 bhp.
The more power you try to extract, the more fuel you will use and the more strain you will put on the engine, clutch and gearbox
An .xls spreadsheet (raw data) version of the information above can be downloaded by clicking the blue arrow below.
Disclaimer: This is a copy version, not originated from obdii365.com. Thought it helpful and share tutorial again.
Genius & Flash Point K-TOUCH K Touch OBDII/BOOT Protocols ECU Chip Tuning Tool Hand-Held KESS V2 with ECM1.61 & Winols 2.24
http://www.obdii365.com/service/seat-change-130-bhp-maps-for-150-bhp-ecu-with-winols-98064.html